One of the current guiding principles of Pediatric Dentistry is to provide early full infant care during the first year of life as a way of maintaining oral health. Child development from conception through the first years of life is marked by many changes.

Tooth eruption at about 6 months of age is a milestone both in terms of functional and psychological changes in the child’s life and in emotional terms for the parents. The expectations about the eruption of the first teeth are great and are greater when the teeth appear early in the oral cavity. When teeth are observed at birth or during the first 30 days of life, being denoted Natal and Neonatal teeth respectively, the interest, curiosity, and concern of clinicians are similar to that of the parents.

Due to its rare occurrence, in the past this anomaly of eruption was associated with superstition and folklore, being related to good or bad omens. This explains the many reports about this topic since 59 B.C., as observed in cuneiform inscriptions detected in the 19th century.1

These teeth also stimulate the interest of both parents and health professionals because of their clinical characteristics, among them their great mobility, which raises concern about the possibility of their being swallowed or aspirated by the infant during nursing.

Several terms have been used in the literature to designate teeth that erupt before the normal time, such as congenital teeth, foetal teeth, predecidual teeth, and dentitia praecox.2 According to the definition presented by Massler and Savara (1950),3 taking only the time of eruption as reference, natal teeth are those observable in the oral cavity at birth and neonatal teeth are those that erupt during the first 30 days of life. This definition has been accepted and utilized by most authors.2-9

This condition has been the subject of curiosity and study since the beginning of time, being surrounded by beliefs and assumptions. Titus Livius, in 59 B.C., considered natal teeth to be a prediction of disastrous events. Caius Plinius Secundus (the Elder), in 23 B.C., believed that a splendid future awaited male infants with natal teeth, whereas the same phenomenon was a bad omen for girls. In Poland, India, and Africa, superstition prevailed for a long time, and in many African tribes children born with teeth were murdered soon after birth be- cause they were believed to bring misfortune to all they would contact.5

The presence of teeth at birth was considered a bad omen by the family of Chinese children, who believed that when these natal teeth would start to bite one of the parents would die.5 In England, the belief was that babies born with teeth would grow to be famous soldiers, whereas in France and Italy the belief was that this condition would guarantee the conquest of the world. Historical figures such as Zoroaster, Hannibal, Luis XIV, Mazarin, Richelieu, Mirabeau, Richard III, and Napoleon may also have been favored by the presence of natal teeth.2,4,5 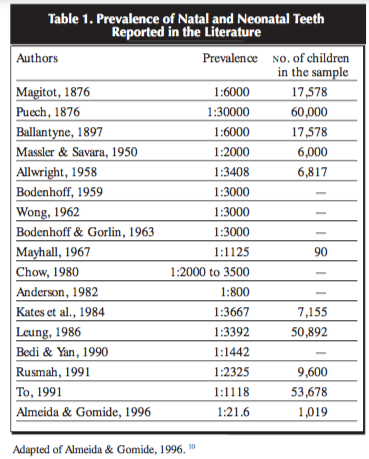 The variation in prevalence observed in Table 1 depends on the different populations studied and on the methods em- ployed in each study. In the case of the high prevalence in children with cleft lip-palate reported by Almeida and Gomide (1996)10, the authors attributed this dental disorder to alveolar fissures and to the superficial position of the teeth in this region.

With respect to gender, there was no difference in prevalence between males and females.11 However, a predilection for fe- males is cited by some authors,4,11,12,13,14,15 with Kates et al (1984)14 reporting a 66% proportion for females against a 31% proportion for males.

The presence of natal and neonatal teeth is definitely a disturbance of biological chronology whose etiology is still unknown.8 It has been related to several factors, such as superficial position of the germ,16,17 infection or malnutrition1, febrile states, 18 eruption accelerated by febrile incidents or hormonal stimulation,8 hereditary transmission of a dominant autosomal gene,17,19,20 osteoblastic activity inside the germ area related to the remodeling phenomenon,21 and hypovitaminosis.13

There is no conclusive evidence of a correlation between early eruption and some systemic condition or syndrome. Some investigators, however, suggest that natal teeth may be associated with some syndromes such as Hallerman-Streiff,12,22 Ellis- Van Creveld,12 craniofacial dysostosis, multiple steacystoma,23 congenital pachyonychia,17 and Sotos Syndrome.8

Leung (1986),1 in a 17-year retrospective study of 50,892 records for children born at the Foothills Provincial Hospital, Calgary, Canada, detected the occurrence of natal teeth in 15 infants, 5 of whom presented one of the following anomalies: cleft palate, Pierre Robin syndrome. Ellis-Van Creveld syndrome, hypocalcemia with fracture of the ribs and rickets, and adrenogenital syndrome with 18-hydroxylase deficiency. There are no studies available that confirm a causal relationship with any of the theories proposed thus far. However, the superficial position of the germ associated with a hereditary factor seems to be the most accepted possibility.

Fauconnier and Gerardy (1953)24 presented an excellent discussion of the difference between “early eruption” and “pre- mature eruption”. They considered “early eruption” to be that occurring because of changes in the endocrine system, whereas “premature eruption” would be a clearly pathological phenomenon with the formation of an incomplete rootless tooth that would exfoliate within a short period of time.

According to Costa (1952),25 early eruption in infants of a few days of age has been confused with a special pathological process described by Capdepont under the name of expulsive folliculitis. This infection may be caused by an exogenous factor brought about by traumatic injury, such as the introduction of a finger into the baby’s mouth by the obstetrician during the Moriceau Maneuver (a process of dislodgment of the foetus’s head retained in the pulvian excavation or in the soft pelvis).

The distinction between true early eruption and expulsive folliculitis has been established on the basis of the following characteristics:25

Morphologically, natal and neonatal teeth may be conical or may be of normal size and shape and opaque yellow-brownish in colour.26

Histological investigations have demonstrated that most of the crowns of natal and neonatal teeth are covered with hypoplas- tic enamel with varying degrees of severity,13,16, 21,26,29 absence of root formation, ample and vascularized pulp, irregular den- tin formation, and lack of cementum formation.5,19 With respect to dentin, Howkins (1932)29 examined natal tooth sections under the microscope and observed normal dentin, except for certain irregular spaces in the region close to the amelodentinal union, as well as a larger pulp chamber. Microscopically irregular interglobular areas with structures resembling osteodentin have been observed, as well as an atypical arrangement of dentinal tubules13,30 and a gradual decrease in the number of dentinal tubules from the crown to the cervical region.26

The importance of a correct diagnosis of natal and neonatal teeth has been pointed out by several investigators1,9,26,31,32,33 who used clinical and radiographic findings in order to deter- mine whether these teeth belonged to the normal dentition or were supernumerary, so that no indiscriminate extractions would be performed.

A radiographic verification of the relationship between a natal and/or neonatal tooth and adjacent structures, nearby teeth, and the presence or absence of a germ in the primary tooth area would determine whether or not the latter belongs to the normal dentition.33 It should be pointed out that most natal and neonatal teeth are primary teeth of the normal dentition and not supernumerary teeth.6 These teeth are usually located in the region of the lower incisors,5, 34 are double in 61% of cases 4, 14 and correspond to teeth of the normal primary dentition in 95% of cases, while 5% are supernumerary.29

Ooshima et al (1986)35 emphasized that multiple natal teeth are extremely rare. However, some rare reports are available in the literature about the involvement of natal molars and ca- nines.7,36,37 According to Bodenhoff and Gorlin (1963),5 85% of the teeth involved are lower incisors, 11% are upper incisors, 3% are lower canines and molars, and only 1% are upper canines and molars.

Other oral manifestations that may be confused with the dental conditions in question are cysts of the dental lamina and Bohn nodules,32 both differentiated from natal and neonatal teeth by radiographic examination.

In the decision of maintain- ing or not these teeth in the oral cavity, some factors should be considered, such as implantation and degree of mobility, in- conveniences during suckling, interference with breast feeding, possibility of traumatic injury, and whether the tooth is part of the normal dentition or is supernumerary.38

If the erupted tooth is diagnosed as a tooth of the normal dentition, each of the other situations mentioned above should be considered. The maintenance of these teeth in the mouth is the first treatment option, unless this would cause injury to the baby.12,39 When well implanted, these teeth should be left in the arch and their removal should be indicated only when they interfere with feeding or when they are highly mobile, with the risk of aspiration.40 Smoothing of the incisal margin was the option re- ported by Martins et al (1998)42 to prevent wounding of the maternal breast during breast feeding.

If the treatment option is extraction, this procedure should not pose any difficulties since these teeth can be removed with a forceps or even with the fingers.20 However, the precautions that should be taken when extracting natal and/or neonatal teeth: avoiding extraction up to the 10th day of life to prevent hemorrhage (Early Haemmorhagic Disease Of Newborn), assessing the need to administer vitamin K before extraction, considering the general health condition of the baby, avoiding unnecessary injury to the gingiva, and being alert to the risk of aspiration during removal.

This waiting period before performing tooth extraction is due to the need to wait for the commensal flora of the intestine to become established and to produce vitamin K, which is essential for the production of prothrombin in the liver.4, 26 Thus, it is safer to wait until a child is 10 days old before extracting the tooth. Vitamin K (0.5-1.0 mg ) is administered intramuscularly to the baby as part of immediate medical care to prevent hemorrhagic disease of the newborn.49

Imperative To Visit The Pediatric Dentist By Age 1

What To Do When Your Child Has A Loose Tooth 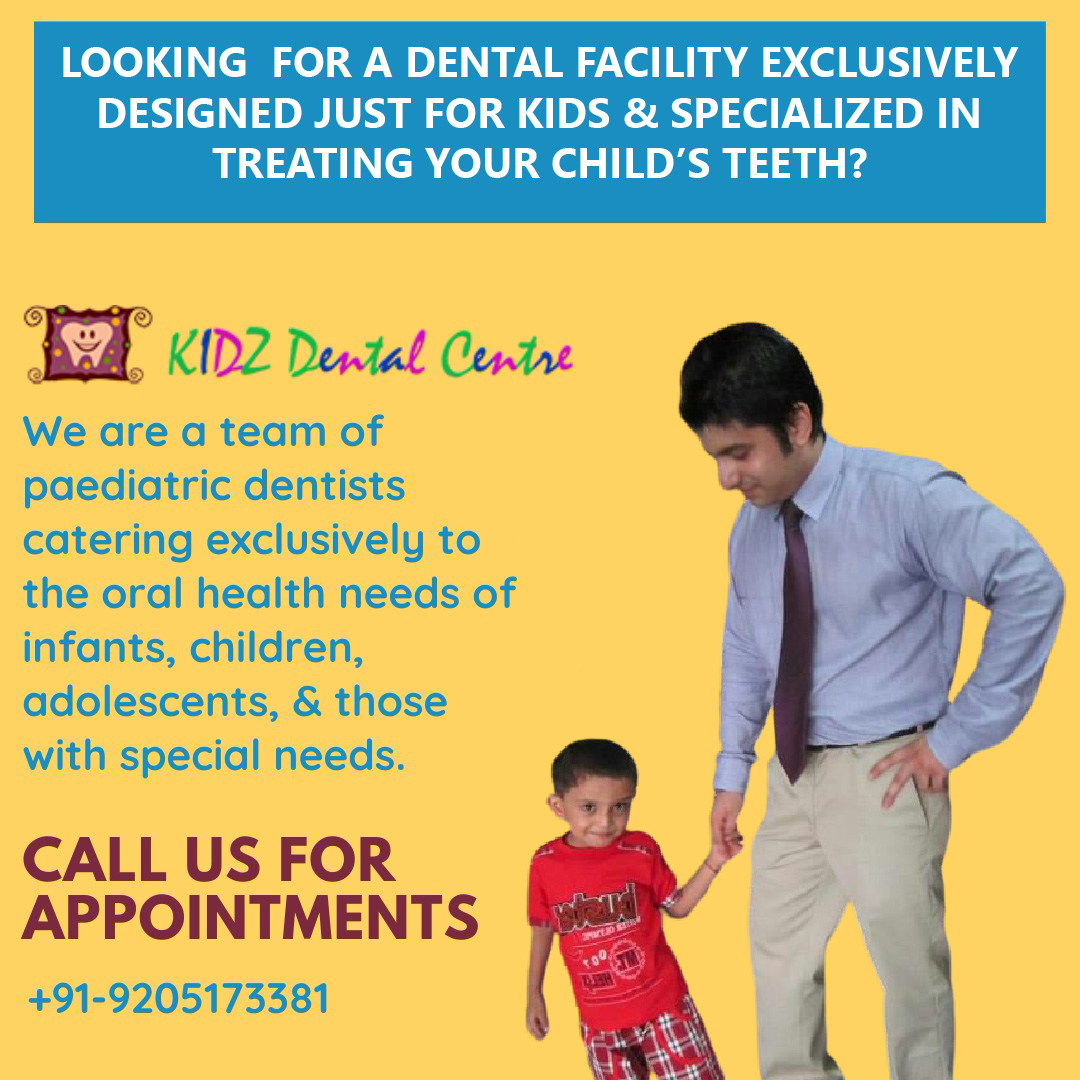